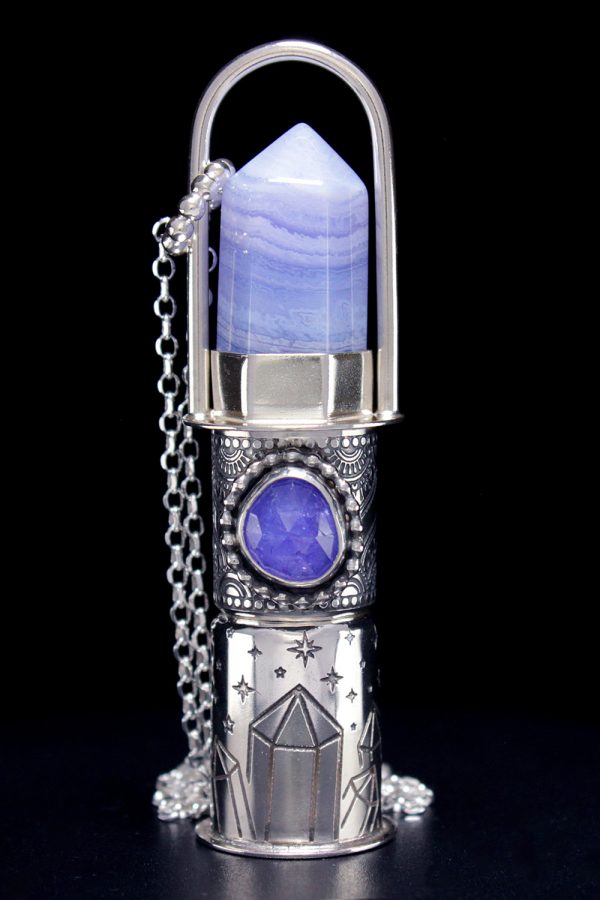 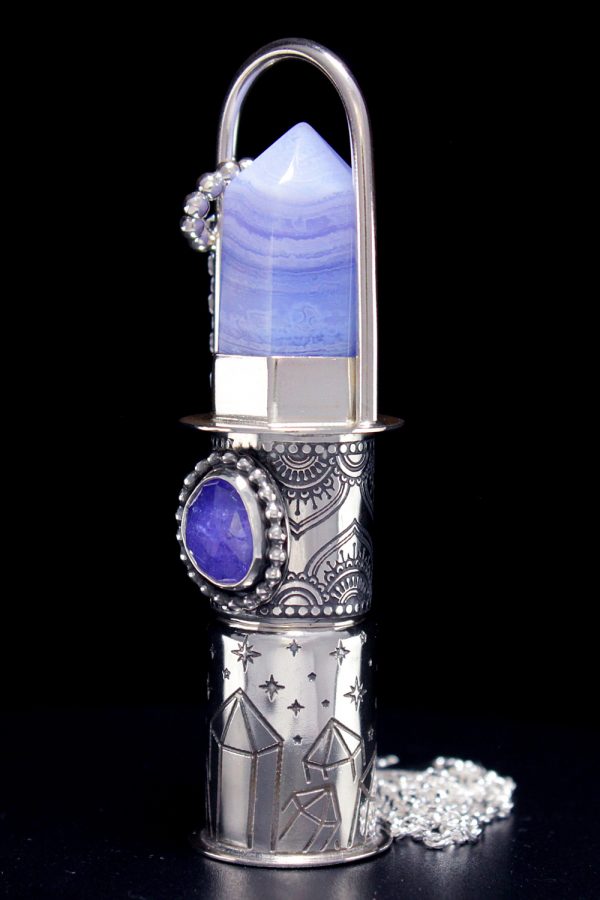 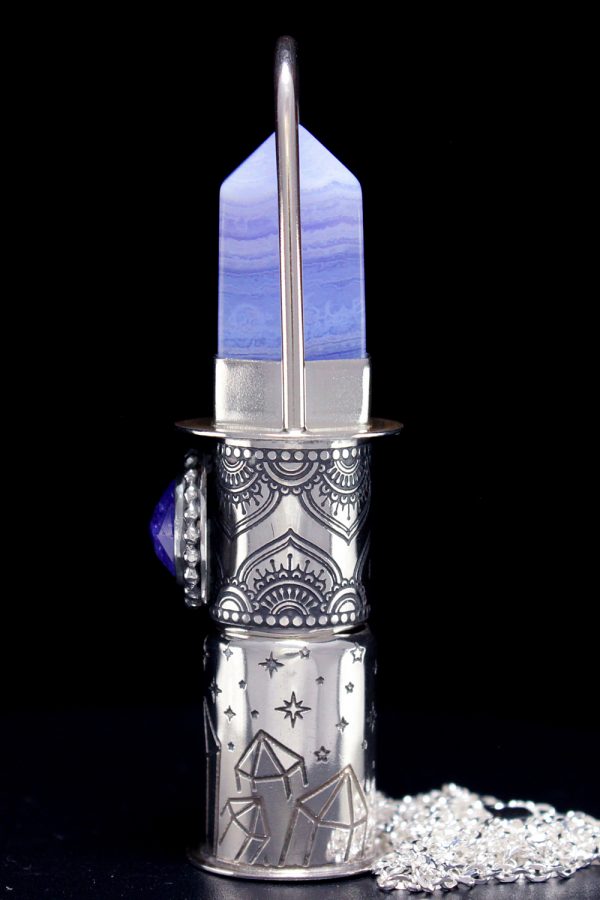 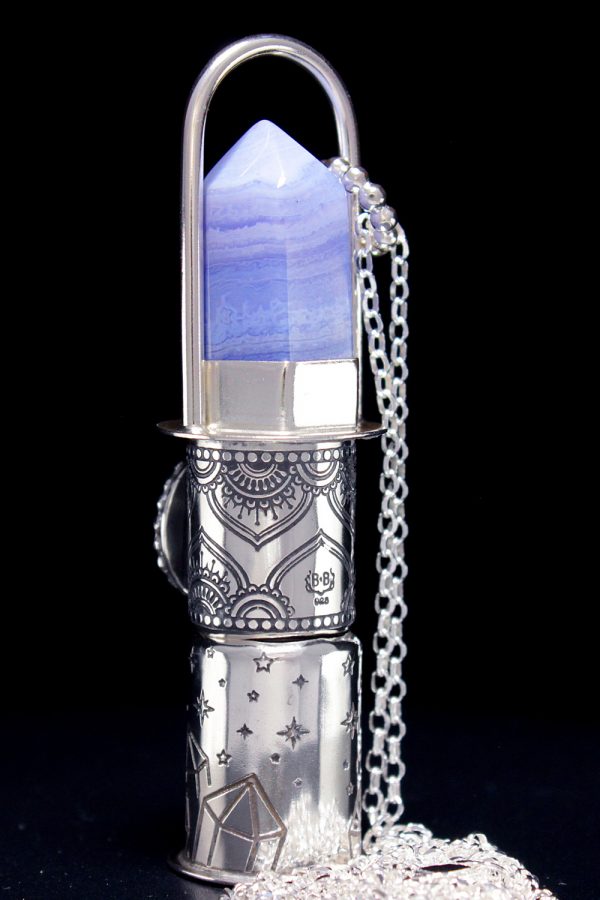 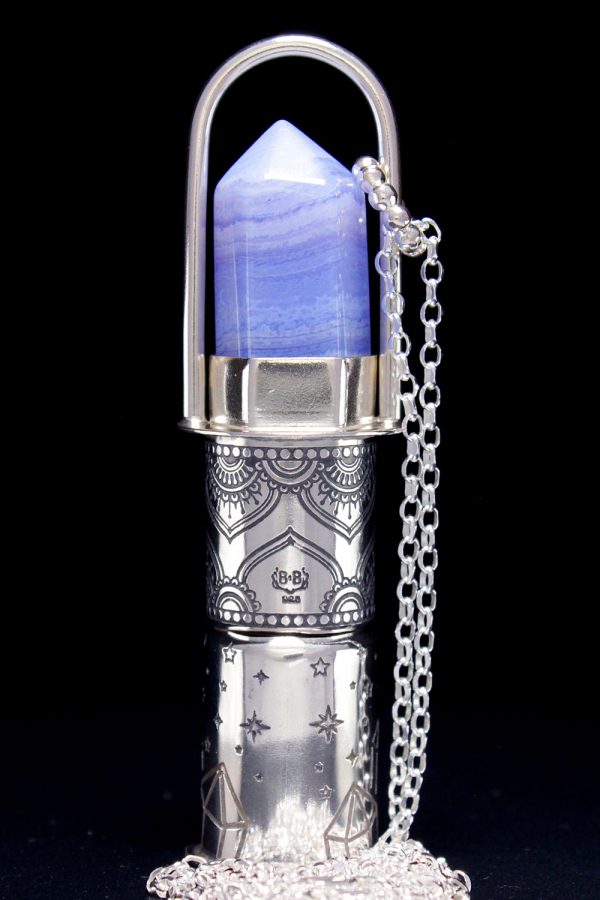 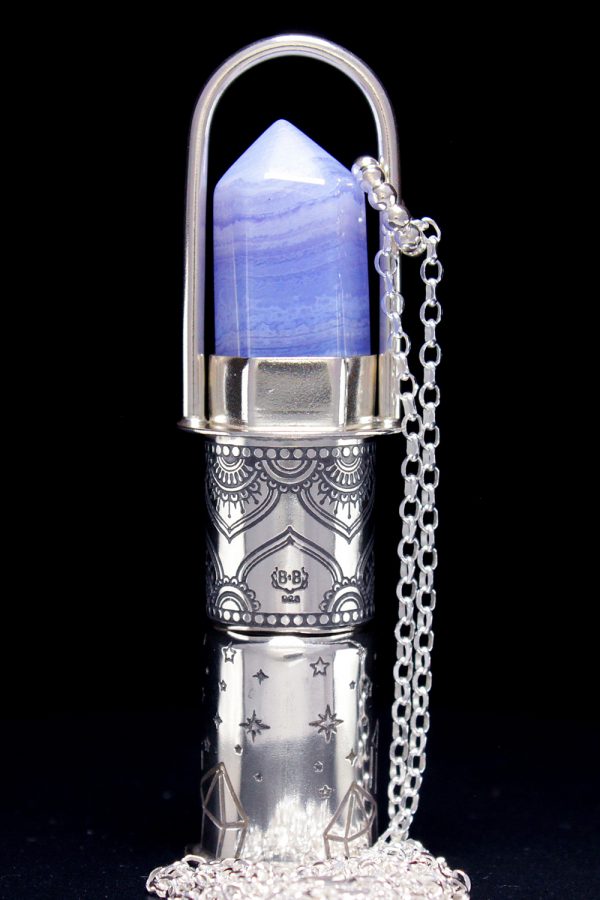 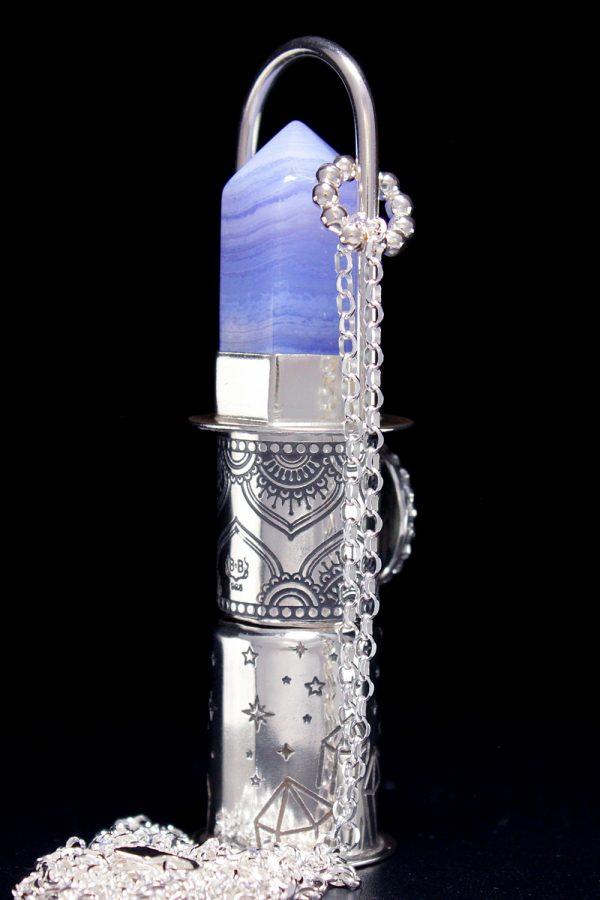 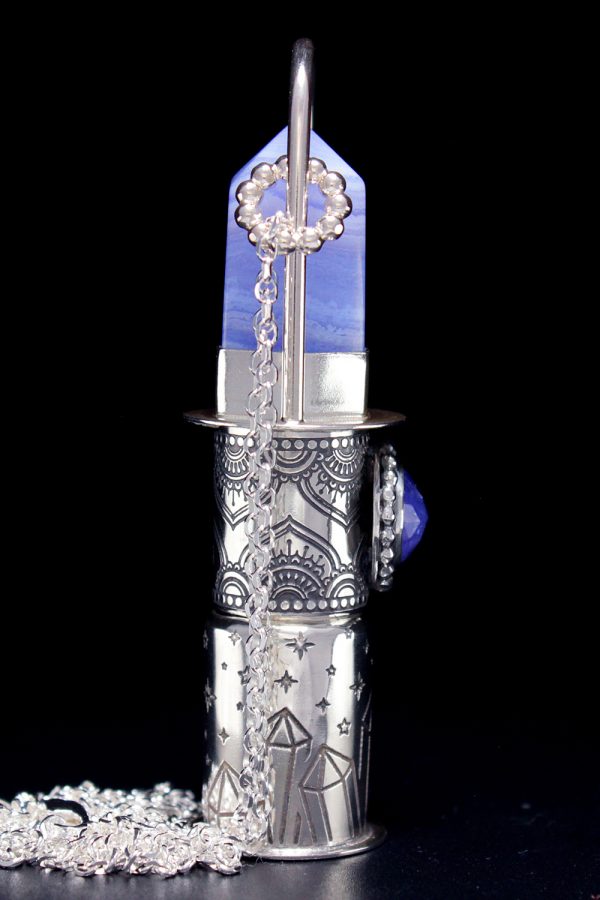 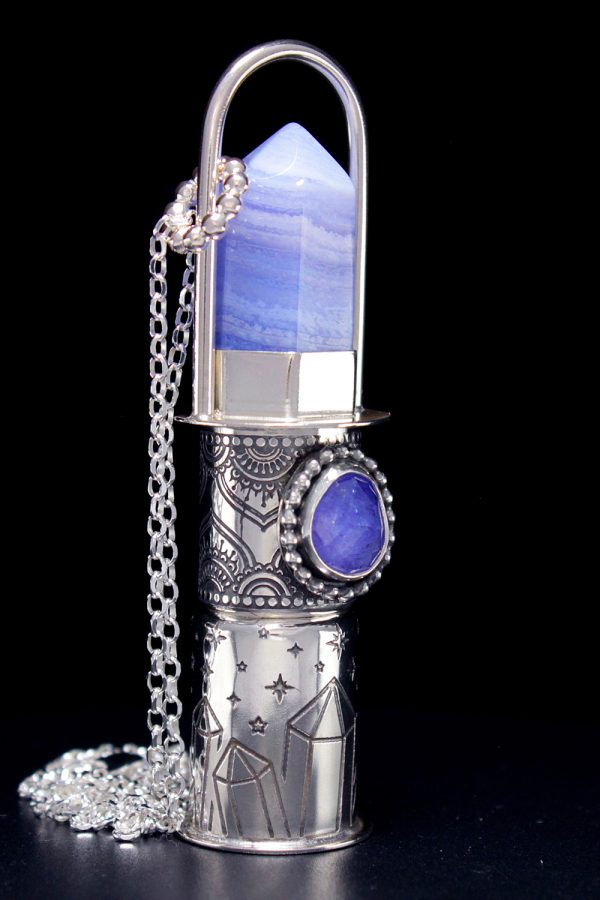 Mountain Lace features my hands-down top selling signature Lace artwork. Every month I create a brand-new Lace design, each inspired by the theme. Laces are seamless, highly detailed, and always feature a stone on the face. Laces always take a lot more love but are worth it every time… so I try to really give them killer one-of-a-kind stones. To most, the snow would give way to rain but here in the Rockies… April snow showers bring delicate spring flowers! I’ve noticed the bravest blossoms are often Grape Hyacinth, vibrant Spring Beauty Crocus, and tiny Western Blue Flax. Drawing inspiration from the spring flowers, I’ve paired Mountain Lace with Periwinkle shades of Tanzanite and the flashiest Moonstones I’ve ever seen. Many of the stones have been carved by a local artisan into stunning delicate spring blooms because there is no such thing as “extra” in my vocabulary. The artwork of Mountain Lace will remind you of the warming rays of the Spring sun paired with daisy-like flowers. You will simply be blown away by the amount of perfect detail packed into such a small package.

The Full Metal Rollerball Necklace is inspired by my love and knowledge of Historical Jewelry, specifically the Victorian Chatelaine. The concept of a Rollerball Necklace or perfume vessel jewelry dates back all the way to ancient Romans. It was later revived and popularized during the Victorian era, worn on what was called a Chatelaine. A Chatelaine was a piece of jewelry with small chains suspending various small tools. These were not just any tools but rather extremely elaborate and decorative pieces; typically thimbles, scissors, notebooks, pencils, and vessels for perfume oils. The most commonly found perfume bottles were either made entirely from metal or encased in metal. I am so so proud to have finally created a true Victorian Chatelaine! It should be noted that all rollers are easily removed from their bottles and many customers have opted to use their necklaces for keepsakes, specimens, and memorials. You can seal your bottles with wax, cork, rubber, or any other seal of your choosing! Your glass will remain forever safe in its metal casing.

This design has been paired with a super rare rose cut Tanzanite cabochon. Tanzanite is such a rare find because it is mined in an area less than 2.5×1.2 miles in Tanzania at the foot of Mount Kilimanjaro. Tanzanite is 1000 times more rare than Diamond according to recent geological surveys. There is really only one stone in the entire world with this particular Periwinkle color. It is the exact shade of the Spring Beauty Crocuses that bloom through the snow every year. It is easily one of the most beautiful stones you will own.

The crystals featured on this Rollerball Necklace are Blue Lace Agate and incredibly rare Tanzanite. Crystals and stones found within my collections are gem-quality specimens curated by artisanal lapidaries and family operated mines. These crystals were curated especially for my rollerball necklaces.

Blue Lace Agates within the Mountain Witch collection are exceptionally rich and banded in shades of pastel pastel blue and indigo. These Blue Lace Agate have been cut and polished by artisans to achieve their beautiful crystalline shape. Blue Lace Agate is a very rare crystal because it is actually a variety of blue banded Chalcedony thought to have been completely mined out! A recent discovery of it in South America allowed me the unique opportunity to obtain some of it for you. While you may see Blue Lace Agate this year at the gem shows, sources are finite so get it while you can!! Blue Lace Agate combines the properties of Agate and Chalcedony, which makes it a uniquely calming and peaceful stone. According to metaphysical thought, Blue Lace Agate is the pinnacle stone of communication. It is believed that the oceanic formations found within promote circulation between emotion, energy, and physical. Helping us to connect to our whole being, Blue Lace Agate can aid communication in both a literal and internal sense.

Tanzanite within the Mountain Witch collection are exceptionally rich in color and incredibly rare. Tanzanite is projected to be completely mined out by 2022 and is becoming one of the most sought after among collectors. The Tanzanite featured in Mountain Witch are cut into either rose cuts or tiny carved blossoms by local artisans. Originally discovered by the Masai tribe, it was later popularized by Tiffany and Company at the turn of the century. In geological terms, that makes Tanzanite a very recent discovery. In Metaphysical terms, Tanzanite is believed to access higher consciousness and enhance intuition and perception. It is commonly thought to be a good stone to wear for anxiety, stress, clarity, focus, and inspiring peace. Due to the high vibrational rate of the stone, some believe that Tanzanite enhances youthfulness and vitality. In many cultures, it is thought that because Tanzanite takes such intense heat to bring forth this stone’s full potential that it also has the ability to bring forth the wearers’ full potential and help them fully realize the alternate side of their personality.